Joey Banks, one of Madison’s busiest drummers, plays in nine local bands, six of which are playing Sunday at his annual birthday party, which helps raise money for Black Star Drum Line.

Banks started holding Joey B’s Birthday Bash when he turned 30. This will be No. 20, because for his 50th birthday last year, he and his wife, Kelli Banks, celebrated privately on a trip to Las Vegas.

His first Birthday Bash was at the Harmony Bar, where Banks has hosted a number of them. The parties have been at many venues since, including the Great Dane and the Crystal Corner Bar, and a host of places no longer in existence: Luther’s Blues, Bab’s French Quarter Kitchen, the Annex and even O’Cayz Corral. Posters from those events hang on the walls of his basement, where he keeps his drum kits.

The bigger names will play 45- or 50-minute sets, with the rest performing for 10 to 30 minutes. (See the information box with this story for the schedule.)

Banks says he’s not the only performer in town playing in as many as nine bands. “It all comes down to scheduling,” said Banks, who also teaches 22 drum students privately and holds a jazz residency at Mount Horeb High School.

Then there’s the fact that he’s musical director for a number of bands, including the Clyde Stubblefield Band, where he’s band leader, organizer, and arranger of music. That band won’t be playing Sunday because it has a regular monthly Monday night gig and just did a big Halloween party at the High Noon.

What Banks is most proud of these days is his youth advocacy work, especially Black Star Drum Line, a local nonprofit Banks started in 2008 at the Boys and Girls Club. It recently became the Milwaukee Bucks “mini beats” drum line for the 2016-17 season. The group made its first Bucks appearance Oct. 8 at the Kohl Center when the Bucks played the Dallas Mavericks in front of more than 10,000 people in an exhibition game.

Their first regular season game is the Nov. 29 home game against LeBron James and the Cleveland Cavaliers.

Banks negotiated a deal for seven high-profile games where the Bucks not only pay him as director, but also give the drummers minimum wage. The drummers also get uniforms; they get fed; and they get three comp tickets per game. “It’s a pretty big deal,” Banks said.

The coed drum line is made up of 20 drummers, ages 9 to 18, who have all taken private lessons with Banks. The birthday party is a benefit for the drum line, with half the proceeds going to help fund it, Banks said.

Many of the musicians performing Sunday, including Gabe Burdulis, Keon Andre and Trilogy, are acts Banks develops in partnership with Greg Doby as Unidec Entertainment Group.

Banks is flying in Burdulis from Nashville, Tennessee, where the 20-year-old singer-songwriter and guitarist has lived since he graduated from Madison West High School in 2014. Burdulis has collaborated with Banks for years and considers him a mentor and friend.

They’ve played in many bands together and Burdulis appreciates performing with someone who knows his music as in-depth as Banks does.

Someone once compared their relationship to the one between Bruce Springsteen and his longtime drummer Max Weinberg, “just because of the way we get along onstage,” Burdulis said.

“Joey’s just an all-around, genuinely great guy who has a really good care for people, but he also is great at what he does. He’s one of the most hard-working musicians, I would say, in the state,” he said.

Banks grew up on Madison’s South Side, near Park Street and Goodman Park, and went to La Follette High School. Now he and Kelli live on the Far West Side, near Elver Park. Their son Trevor, 29, is a filmmaker in New York working on a documentary on Stubblefield. Their other son, Cody, 25, is a graphic designer for a Chicago company.

Banks said that, despite going to a predominately white high school where most of his peers listened to metal and classic rock, he learned to appreciate almost every kind of music. He’s known for playing straight-ahead jazz, funk, hip-hop, R&B, blues, rock and Americana.

Besides teaching and performing, he also does a great deal of recording, playing with New York blues musician Bobby Messano on three albums, two of which were nominated for Grammy Awards.

Prince is a big influence, but much of who he is as a drummer comes from playing with Honor Among Thieves, which Banks calls “the most eclectic band ever.”

Whatever music he plays, he does it primarily for the crowd reaction. “I wouldn’t play drums if people didn’t dig what I was doing. If I couldn’t get people on the dance floor,” Banks said. 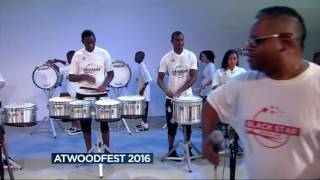